“Through pure consciousness practice — Mingjue — we can reach a harmonious and stable mind state, balance the energy of the whole body, and clear away all kinds of illnesses.” — Teacher Wei

In 2006, Wei Qifeng, an already esteemed qigong teacher and healer in China, found himself in a small, rented room near a legendary mountain west of Beijing called Xiangshan, alone in deep suffering. His life’s dream had seemingly ended several years earlier when the Huaxia Center (a.k.a, “Medicineless Qigong Hospital”) was closed down. He had returned to his family’s countryside home to serve the youth and the disabled, then onto Beijing to practice acupuncture and massage. But without the steady guidance of his teacher, Grandmaster Pang, and his community nearby, Wei felt adrift and empty. Now in the mountains, he wanted to resolve this dilemma, to find inner peace and freedom. The more he tried, however, the heavier his heart and mind became. Three months passed. So one day, he hiked up a tall peak, laid himself under the big, blue sky, and completely surrendered his practice of Zhineng Qigong, which was the very foundation of his life.

In this state of surrender, Teacher Wei traveled southward to Hainan, where he encountered a woman practicing Zhineng Qigong in the park. They spoke. She learned of his background — that he had gone through the two-year master training program with Grandmaster Pang, served as an editor at the center, advanced to a high level of healing abilities, and also guided some 500-600 hospital staff members in morning and evening practices — and she promptly invited him to lead a practice for her group. To his surprise, the same practices he had cultivated for over a decade felt different now. Something had shifted on the mountain, and the oneness of the universe felt clearer and simpler. “I enjoy this!” he realized. “It’s so playful!”

Born in the northwestern Gansu province to a family of farmers, Teacher Wei was given the name chosen by his older sister: Qifeng. “Feng means ‘pioneer,’” Teacher Wei explained. “Feng was also the name of a character my sister had read about in school. This character was a very good man, always showing unconditional love to others.” As it turned out, English came easily to Teacher Wei, and he would become a pioneer in bringing Zhineng Qigong to the West, with students across Europe, Australia and New Zealand, South America, and America. As for the unconditional love of his namesake, his whole body exudes compassion and joy as he guides others to the depths of the cosmos with a lightness and clarity that is, at once, disarming and commanding.

Since his realization on the mountain in 2006, Teacher Wei has been highlighting the development of the pure consciousness state — or Mingjue — as his foundational teaching, with the qigong movements guided from this expanded mindset to amplify healing and awakening. This highest level of practice, he says, from a collective field where practitioners connect heart to heart in a state of pure consciousness, has the greatest potential for deep transformation, personal and global.

The lineage of Zhineng Qigong (zhi means wisdom, neng means capability) was founded by Grandmaster Dr. Pang Ming who trained under many different grandmasters, studied both Western and Eastern medicine, and also mastered several forms of martial arts. His theories and practices aim to describe the laws of the universe and human life, informed by Confucianism, Daoism, Buddhism, medical qigong, martial arts, folk qigong, contemporary science, medicine, and philosophy. At its core is a sense of universal oneness. Through consciousness training, integrated movement, visualization, sound, and scientific theory, Zhineng Qigong offers a system through which healing and awakening to extrasensory perceptions can arise.

At the Medicine-less Hospital, there were no so-called “patients.” Instead, everyone was a “student,” which shifted the mindset from helpless to empowered, from passive to participatory. Countless people from all over China came to the hospital, more than 400,000 experiencing healing from terminal or debilitating conditions, most deemed incurable by their doctors and healers. Teacher Wei discovered he had the gift of healing, too. On his first trip home to his family, he found his mother afflicted with leg and knee pain, so much so that her posture was unnatural and she had to use the wall for support. At the end of the first day of his energy healing practices, she walked without assistance. “It’s not a miracle,” Teacher Wei says, matter-of-factly. “In Zhineng Qigong, we have a different reference framework.”

In 2018, Teacher Wei co-founded the World Consciousness Community to build a worldwide consciousness field — “to connect practitioners heart to heart in the Mingjue state, to support each other and to enhance a higher consciousness for peace, freedom, healing, love, happiness, and harmony for each individual as well as the whole world.” He is the founder and organizer of Harmonious Big Family and the Mingjue Academy. And he has also translated several of Grandmaster Pang’s books into English. 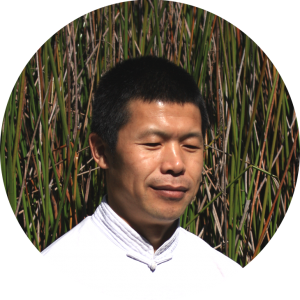 “I practiced Qigong 30 years, and learnt many methods. What I discovered is that it’s better if you practice just a few simple methods deeply.

If you practice many kinds of methods this can create a division in the information of consciousness.

It’s like when you want to make a well. You need to focus on one place and go deeper and deeper, dig, dig, and then – finally – the water will emerge.

If you always look for a new place and keep changing, and searching from place to place, then you most likely will never go beyond the surface; you will not find the water deep inside the earth.”

This website uses cookies to improve your experience while you navigate through the website. Out of these cookies, the cookies that are categorized as necessary are stored on your browser as they are essential for the working of basic functionalities of the website. We also use third-party cookies that help us analyze and understand how you use this website. These cookies will be stored in your browser only with your consent. You also have the option to opt-out of these cookies. But opting out of some of these cookies may have an effect on your browsing experience.
Necessary Always Enabled
Necessary cookies are absolutely essential for the website to function properly. This category only includes cookies that ensures basic functionalities and security features of the website. These cookies do not store any personal information.
Non-necessary
Any cookies that may not be particularly necessary for the website to function and is used specifically to collect user personal data via analytics, ads, other embedded contents are termed as non-necessary cookies. It is mandatory to procure user consent prior to running these cookies on your website.
SAVE & ACCEPT